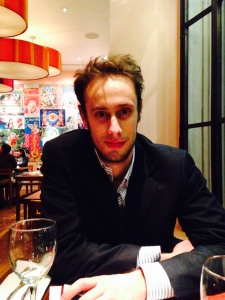 Born in Rome on September 13, 1985, Lorenzo Perrelli has lived his childhood in the Italian capital and then moved to the United States, specifically in New York, at the age of 10 years.

Two years living overseas have allowed him to learn the language and look out to new worlds.

Returned to the base, he then spent his youth, high school and university, among the “Roman walls” to then decide to leave them, once graduated in Political Science, to go overseas in London, where he earned a Masters Degree in Journalism, radio and television, in 2011.

After graduating he started collaborate with medias and agencies, producing various videos, features, documentaries and interviews. He produced a 15 minutes documentary on the Armenian Genocide, that was broadcasted on Sky News.

Lately he founded the production company Wawwa Productions and was also guest lecturer in universities, in London and Washington, focusing on the future of medias and the best techniques to become a freelance journalist.

He works now as a business development manager with Jupiter Ltd and No Boundaries, an international sport club based in London.

GLASTONBURY FESTIVAL – July 2017
– Video Maker: Covering live events from one of the most famous and iconic festivals in the world.
– Youtube Page.

SKY NEWS – Video maker and producer – Freelance
The survivors of the Armenian genocide – Preview – (Link for the complete documentary is available on request, also in English).

L’ESPRESSO – Journalist, video maker and producer – Freelance
1) Syrian refugees in Lebanon.
2) Journey to the Scottish referendum.
3) India to the discovery of football.

LOCAL FREDDIE LTD. – July 2016 to June 2017
Video maker and producer: Video producer for a touristic start up based in London.

WALL STREET ITALIA – London: October 2012 to September 2014
Web Journalist: Covering daily news regarding different topics from politics, to economy, to science and technology and uploading videos and photos on the website.

OBS (Olympic Broadcast Service) – London: June 2012 to August 2012
Liaison Officer: Assisting medias in the mix zone of the event. Asking athletes if they are willing to come for an interview. Checking if there are cameras not allowed being in the venue. Assisting operators and commentators in the commentary positions.
Technical Personnel: Assisting camera crew and operators for any problems inside and outside the field of play. Checking if everything is working during the live of the event.

YOUROMA – January 2009 to July 2011
Video Producer: Covering daily news regarding the city of Rome, different topics from politics, to culture, business and sport.
Video Editor: Editing video material and putting it in the web site.

INSIDE ART (Art Magazine) – March 2007 to September 2008
Print Journalist: Covering different topics but mainly concentrating on the most important art exhibitions around the world.